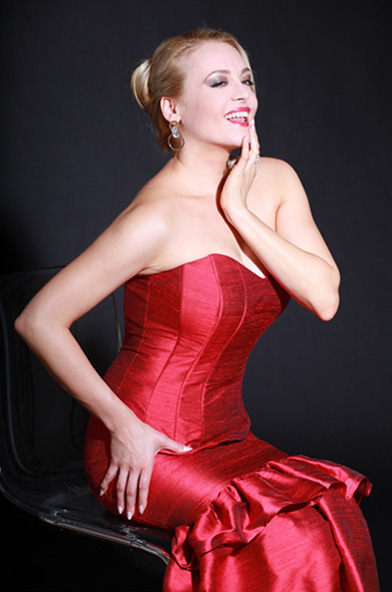 Maria Taytakova graduated from the Conservatory of Music in Bratislava (prof. Jarmila Smyčková, prof. Zuzana Stankociová) in opera studies and from the Academy of Arts in Banská Bystrica (prof. Eva Blahová) in vocal interpretation. She made her stage debut as Lucia (G. Donizetti: Lucia di Lammermoor) at the State Theatre Košice (Slovakia) in 2009. This was followed by the role of Musetta (G. Puccini: La Bohème) at the Teatro San Babila in Milano (Italy), the role of Gilda (G. Verdi: Rigoletto) at the Teatro della Luna in Milano (Italy), a concert tour with the Veneto Philharmonic (Italy), and a concert tour with the Czech Philharmonic Collegium (Japan) during which she performed in thirteen Japanese cities.

In 2013 she presented herself for the first time in Austria in the role of Gilda (G. Verdi: Rigoletto) at the Klassik Festival Schloss Kirchstetten. The critics highlighted her “perfect mastery of coloraturas together with dramatic culminations” (Der Neue Merker, 3.8.2013), and appreciated also her role interpretation due to its “immense thoroughness, depth and full-blown drama” (Café Momus, 28.9.2013).After this debut she was offered the role of Adina (G. Donizetti: L’Elisir d’amore) at the same festival in Austria. Her Adina caught the attention by an “excellent role shaping” (Café Momus, 20.8.2015) and by her “wonderful, agile soprano with a sonorous middle register, magnificent legato and sparkling coloraturas” (Hintermayer Music, 2.8.2015).

In the next period she sang the roles of Najade (R. Strauss: Ariadne auf Naxos) and Oberto (G. F. Händel: Alcina) at the stage of the State Theatre Košice (Slovakia). The critics appreciated her “round chamber tone” and “flawless coloraturas” (Operaplus.cz, 28.2.2016), and highlighted also her “colourful and round voice” (Operaplus.cz, 11.10.2017) after the guest performance at the Estate Theatre Prague (Czech republic).

In 2016 she performed the role of Piramo (J. A. Hasse: Piramo e Tisbe) at the TEATRO BAROCCO in Stift Altenburg (Austria), and in 2017 the same role at the Schlosstheater Laxenburg bei Wien (Austria). In the role of Piramo she “shined through the versatile expression of her soprano” (Der Neue Merker, 9.7.2016). The critics also pointed out her “elegantly guided voice” with a “silvery sound” (Kurier, 27.6.2016). The Piramo e Tisbe production by TEATRO BAROCCO was nominated for the Austrian Music Theater Prize 2017.

In 2018 she prepared the role of Violetta (G. Verdi: La Traviata) and performed at the series of opera gala within the Mythos Opera Festival (Italy). In 2019 she sang the role of Pamina (W. A. Mozart: Zauberflöte) at the opera studio in Banská Bystrica (Slovakia) and the role of Rosetta (G. A. Benda: Il buon marito) at the TEATRO BAROCCO in Baden bei Wien (Austria). In the opera Il Buon marito Maria Taytakova “enthused both vocally and dramatically with her distinctive comedic play” (Online Merker, 15.7.2019) as “a self-assured Rosetta, differentiated in expression, whereby always a little soothing irony may take place” (Salzburger Nachrichten, 16.7.2019).

Besides the theatre productions she has performed at more than 100 concerts and recitals in Slovakia, Czech republic, Austria, Italy, Croatia, Germany, Netherlands, Sweden, and Japan. In 2019 she presented herself at vocal recitals in Granada and Malaga (Spain), summer music festival at Bojnice castle (Slovakia), Coronation concert in Bratislava (Slovakia) and opera gala Belcantissimo at the Klassik Festival Schloss Kirchstetten (Austria). Within the chamber music she specializes in the interpretation of songs from the turn of the 19th and 20th Century of the Slovak, French and German provenance.